One of the things that every diver should know is that being able to experience and witness marine life in such close proximity is a great privilege. As such, it is important that everyone respects the ocean. Divemasters, at least the good ones, will be sure to remind every diver not take anything with them from the ocean depths and not to tease or touch the marine life. Many times though, divers, out of sheer arrogance or from ignorance, do these things all the time. There are several good reasons why you should not touch marine life: Even though we should be concerned for our own safety, it is important to consider the well-being of the creatures we interact with underwater. The rule of thumb is not to remove anything from the ocean. However, people want to take creatures out of the ocean, collect starfish and shells to keep as souvenirs without thinking about how their actions are disrupting the balance of the marine ecosystem. In many countries, taking plants or animals from the ocean is against the national and local law. Divers should work to protect marine life by abstaining from touching both plants and animals. 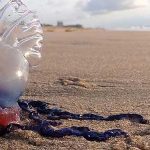