The underwater world is beautiful and that is why so many of us are hooked on diving. But the underwater world is also the habitat for many dangerous marine lives and one of them is this famous jellyfish lookalike, Man of War.  Lucky for us divers this fascinating creature is normally flooding with the currents and winds far aways from our normal dive sites.

The Portuguese Man of War, scientifically known as Physalia Physalis, looks very much like jellyfish and is many times mistaken for it.  Since both of them inhabit sub-tropical waters, have stinging nematocysts, long tentacles and bulbous bells, telling them apart can be difficult.  The Man-of-war is actually not one organism but a colony of them.  There are four organisms that live and work together; each one specialized in its task such that the survival of each one is dependent on all the others.

The Pneumatophore
– This is a bladder that is filled with gas. 90% of the gas is carbon dioxide and this part tends to be above the surface of the water, sometimes by up to 6 inches. When it is in distress, it will deflate the bladder so that it is submerged.  In order to survive, these floating parts can lean either to the right or left such that should there be a big wind, one-half of the animal would go one way while the other would go the other way.  If it were washed ashore in such an instance, only one half would die.

They tend to collect together in large groups where you can find more than 1000 of them. Usually, this is in open water but if blown by the wind they can come to the shores.

The sting rarely kills. However, it is an extremely painful sting.  It does not need to be alive to sting you either, just like a jellyfish.  It is important to make sure that contact is avoided by wearing protective thick attire and gloves when handling them.

In the event of a sting, be sure to remove all tentacles that may be in the injured area.  Additionally, avoid physical contact.  Be sure to rinse the affected area with fresh water or seawater. Avoid the application of vinegar and use ice instead.  It is important that the stung person be monitored for allergic reaction and shock.

When it comes to scuba diving, we meet so many species of creatures underwater at any given time. Some of them are dangerous like Man of War and are not something we would like to meet face to face. Have you met one on any of your dives before? 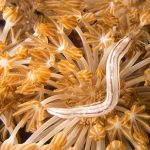